I’m cutting to the chase and telling you that today’s blog post is about making Taco Bell food at home. I’m not bashing Taco Bell, or anyone who eats there. It’s just that I’ve found that Taco Bell and I don’t get along the way we used to. I’ve tried a few times to reconcile, and it never works out. I don’t know who changed in the relationship, them or me, but I’m thinking we just might be better off as acquaintances that rarely meet.

But there’s something about the Bell that remains nostalgic. My sister and I used to go there to have lunch and talk when she lived nearby while I was in High School. She’d drive us in her car that we’d dubbed Prunella, and laugh at the “Bat Screen” (read: smoke) from the exhaust pipe when we’d take off from a light. It was like my glimpse at “grown up” life. Grown ups got to drive their own cars, order what they wanted at restaurants, and if they wanted two orders of cinnamon twists, then they ORDERED two. I also got to talk to my older sister about stuff that felt bigger and more mature than conversations yelled across a school cafeteria table. It wasn’t about the food, it was about the feeling, and I still associate that feeling with Taco Bell.

I’ve waxed poetic long enough about a fast food place known more for its various uses of nacho cheese than for its fancy food. But it was all to explain why I’d want to recreate food from a restaurant I don’t even visit. And if you’ve been a reader for awhile, you’ll notice I love to recreate restaurant favorites at home. Next time you are considering making a run for the border, think about making an ingredient run instead and tackle the crunch wrap at home. It really is easy, it’s nostalgic, and if you want two? Well, you know what to do. 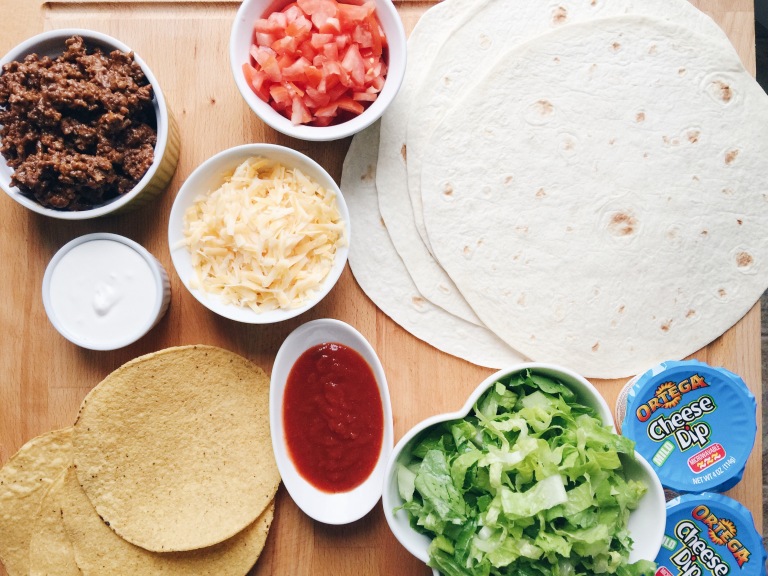 1 packet Taco Seasoning (we use the homemade seasoning blend here)

Taco Sauce and Guacamole for serving

Crumble the ground meat into a skillet and brown. Add in the taco seasoning and water, stirring to combine. Simmer for 2-3 minutes. Set aside.

Heat the tortillas to soften in a warm oven for a few minutes, or a microwave for about 20 seconds. Take two of the tortillas and tear them into fourths. Keep the other six whole.

Assembly time! Place one of the whole tortillas on your work surface. Put about 1/4 cup of the seasoned meat in the center. Top with 1 Tablespoon of the nacho cheese. Place a tostada round on the top of the meat and cheese. Layer on a Tablespoon of the sour cream, followed by the lettuce, some chopped tomato, and a little of the shredded Colby Jack cheese.

Now it’s time to fold. Fold the edges in towards the center, around the tostada round. You’ll notice there’s a hole in the middle where the tortilla doesn’t cover all of the ingredients. This is normal. Remember those tortillas we tore into fourths? This is where they come in. Tuck a tortilla fourth into the center to cover the hole. Press down lightly to compact everything and repeat those steps to make 5 more crunch wraps. You’ll have a total of 6. 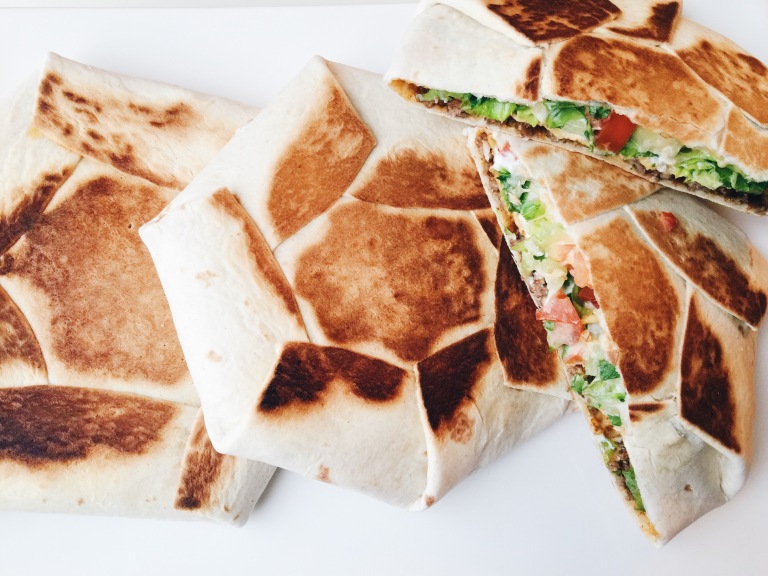 Heat a large skillet over medium-high heat. Place the crunch wrap, folded side down in the skillet and cook until browned. Carefully flip over and brown the other side. Let cool for a minute before eating. You can also cook this in a sandwich press, like we do. Just pop it in, keep an eye on it, and remove when toasty brown.

Eating time. You can go for it whole, like most of us do, or cut it in half for easier eating, which we do for the smallest human in our house. Put some taco sauce, guacamole, or extra sour cream on each plate so you can dip before each crunchy bite. Yum!

Let’s be Facebook-y! Find Me on FB!

Let’s be Facebook-y! Find Me on FB!